Shorten the Road - Running with Company by John McCann 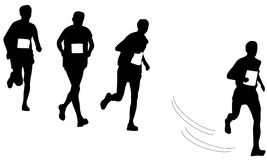 My first introduction to running was through a friend that had just taken it up and he suggested that a couple of us should get together and try running a few miles. At the time, the thoughts of running any distance filled me with instant dread but the thoughts of doing it with friends that may have the same fears about running helped ease me into it.
We started out with relatively low mileage and the fact that there would be a group gathered to go running was the exact motivation I needed to get going! On doing those first few miles I was surprised how much I enjoyed it. It was basically hanging out with friends and an hour later your exercise was done! Simple! As we all slowly became hooked on running, talks of half marathons began to emerge and this is where having a group or a running buddy becomes very handy.
Having to face those long miles is tough enough but, on your own makes that slog even tougher!
Even now when one of us maybe training for a half marathon individually, we still reach out for that bit of company for even a few miles on the long runs to help shorten the long road ahead!
Posted by Half on the Head at 08:40